Lemesos, Limassol as we commonly know it, is a quaint Cypriot city overflowing with character, culture and charisma. The city encases Limassol castle, the unofficial heart and focal point of the city. 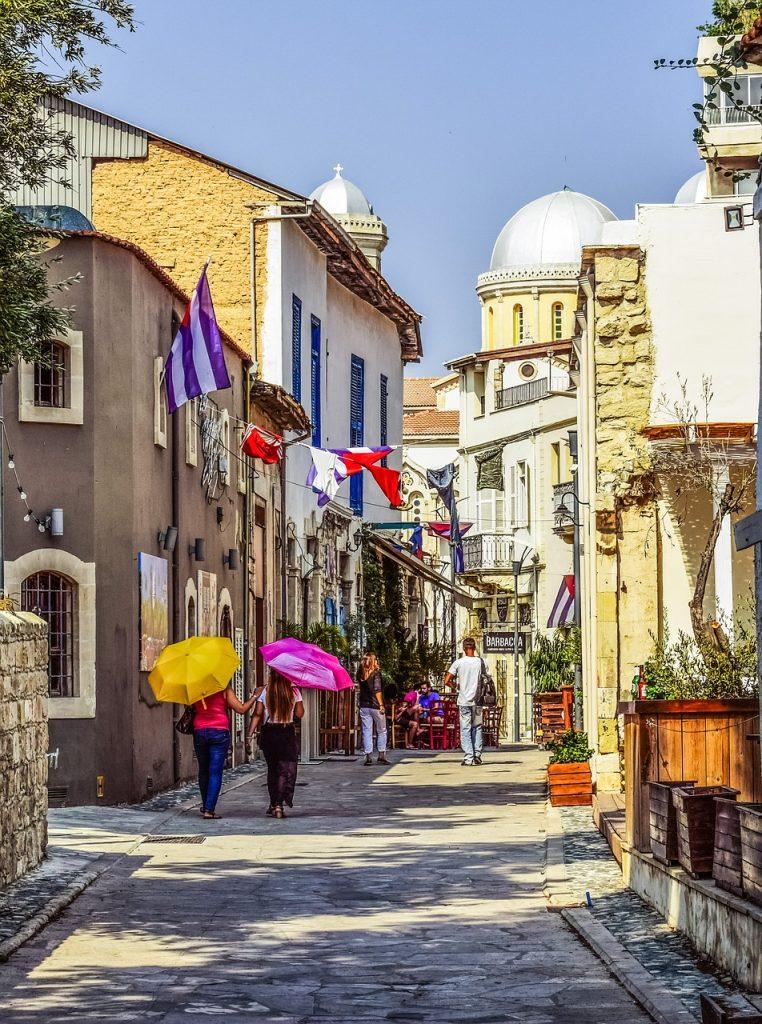 The streets of the juxtaposed city are lined with modern residential apartments and traditional shuttered houses, fancy clothing boutiques and classic markets and buzzing bars and restaurants situated alongside rustic cafés; seamlessly highlighting the presence of locals and expatriates of all ages within the city.

There are approximately 68,000 Brits living in Cyprus, a great deal of which are of retirement age. Cyprus is often the retirement country of choice due to its nonchalant lifestyle, mouthwatering Cypriot cuisine, year-round sunshine, relaxing sandy beaches and scenic landscapes.

Although that sounds ideal to us, lounging in the sun or a stroll along the beach might become repetitive and an active life post-work might be what you are looking for… Limassol incoming!
Limassol is a culturally rich city with an abundance of festivals, activities and historical sites to occupy your days and allowing you to live a fulfilled and wholesome retirement.

We have taken a look at some of the best cultural jamborees, attractions and events taking place in Limassol and its surrounding areas, so you can live your best life when retiring in Cyprus!

The medieval site is centrally located in the thick of Limassol city and close to the old harbour. Archaeological experts found the original castle dated back to Early Christian Basilica, 4-7th Century. The castle that stands today is a rebuild that was constructed around 1590 under Ottoman rule, after the castle was captured by the Ottomans in 1538.

Originally built in the 13th Century, Kolossi Castle was under the ownership of the Knights Templar, who utilised the castle as a base to produce and export ‘vin de Commanderie,’ a sweet wine that still remains one of the traditional wines to this day. You can also tie in your trip to Kolossi Medieval Castle with a venture around the ruins of a 14th century sugar mill that is located alongside the castle.

Amathus archaeological site is a UNESCO World Heritage Site and one of Cyprus’ most significant and important ancient historical sites. Amathus was a Cypriot ancient royal city until 300 BC but dates all the way back to 1100 BC. You can wander the historical ruins and treasures at your leisure and embrace the ancient culture.

The colourful and creative Limassol carnival is the biggest and most energetic carnival on the island. Limassol Carnival Festival begins 10 days before Lent or 50 days before the Orthodox Easter, with the decorated Carnival King entering the city to commence celebrations.

During the first Sunday of the festival there is a Children’s parade, followed by the Serenaders’ show that becomes the main attraction of the day. The first week is known as ‘Kreatini,’ or Meat Week, as it is the last week to eat meat before Lent starts.

The second week is known as ‘Tyrini,’ or Cheese Week and it is the start of the climax of the festival. During this time the main Grand Carnival Parade takes place, consisting of bold, colourful floats, fancy dress, since and dancing.

Limassol’s annual wine festival has played a big part in the culture of the city ever since its inception in 1961. The festival is occurs in the Municipal Gardens from the start of September and continues for twelve days.

The ancient inspired festival allows locals, expats and holidaymakers to taste the finest wines the island has to offer, accompanied by delectable local food and sons, theatrical performances and folkloric dancing.

Lemesia originated in 1998 and has taken place in Limassol ever since and it is undoubtedly the biggest sporting event in Cyprus. Lemesia is largely for professional participation and the event draws in athletes from several different countries to compete in sports such as cycling, swimming, rhythmic gymnastics, boxing, triathlon and shooting to name a few.

The Municipal Museum of Folk Art is home to some of Cyprus’ most momentous collections of Cypriot Folk Art and Craft. The collections within the museum date from the beginning of the 19th century, right up to the start of the 20th century, with pieces of embroidery, woodwork, jewellery, garments, furniture, utensils and agriculture tools on display.

The Lemesos District Archaeological Museum showcases artefacts and antiques from a number of archaeological sites across Limassol and its neighbouring locations. The treasures age back to Neolithic and Roman periods and make up three unique exhibits. The antiques include everything from pottery and lamps, coins and jewellery, tombstone and sculptures, limestone, marble, inscriptions and beyond.

Limassol is a hub of culture, excitement and history. Retiring to Limassol means that every day, you will wake up with the choice to lounge in the Mediterranean sun, explore ancient architecture and ruins or socialise with your new local and expatriate friends in the bustling city centre.

If you are moving to Cyprus, retiring in Limassol or just taking a year out, Anglo Pacific are experts in shipping goods to Cyprus, but we can also assist you with customs, document completion or just answer any queries. If this is what you are looking for, contact us today on 0800 633 5445 and one of our Cyprus shipping experts will be happy to help.